Greta's Finished Projects and Such

So it's been a little while... I have made such many things since my last post, so here we go! 😁

I knit a couple things as test knits for Sari Nordlund: the Onnen sweater (the pattern hasn't been released yet) and the 2x2 Hat. I really like both of them, I wear the hat all the time (and just started my second one last night), and I wore the sweater for the first time yesterday. I am not crazy about the yarn I used for the sweater, so many fuzzies coming off of it, I could not keep up! After the third or fourth lint rollering I finally just took it off, so now I need to figure out how to deal with that.

This summer I also participated in the Summer of Basics hosted by Karen Templer of Fringe Association. I was all over the place with what I chose to make, and I just kept adding more so I didn't finish everything, but I got some good things out of it! And I'm already thinking about how I'll do it better next year. I think my best makes were the smallest ones - three pairs of underwear out of scrap fabric and three pairs of halvsie/clog socks out of left over yarn. 😊 I tried three different patterns for the underwear: Acacia in yellow, Watson in grey, and Ladyshorts in the print. I wanted to see how they each fit and find my favorite, and just practice in general. I was surprised, but the Ladyshorts are my favorite and by far the most comfortable, the other two have a weirdly wide crotch piece? I'd like to try tweaking the other two and make more in general because it was no where near as fiddly as I expected it to be to make my own underwear (also so much cheaper!). I made up the socks pattern myself, but really it's just the first part of any toe up sock pattern. I wore them a ton with clogs this summer and I'll definitely be making more for next summer!

I also knit two sweaters: the Alice sweater and the Pennington sweater and frankly wasn't hugely happy with either of them. 😩 My yarn choice is super weird for the Alice sweater and I probably should have knit one size smaller. The yarn is 100% rayon which is just sooooo slippery, though kind of cool/unique (I feel like I would have loved this in the 90's), and my gauge swatch was way off but the final product was much closer to the pattern gauge. It was originally white so I experimented with dying and I really like how that part came out! I did wear it a couple of times, and I think I'll wear it again, so it wasn't a total loss. I was so, so disappointed in the Pennington sweater at first, but I've come to terms with it more. The pattern was missing some critical measurement information, and the sweater came out waaaaay bigger than I expected it to, so it's not really my style. I have plans to rip back to just after the colorwork section (it was knit top-down) and tighten up/lengthen the body a bit so hopefully it will be better in time to wear it for spring. It was more fair isle practice (and that part is really pretty!) so it wasn't a total loss, but it's been awhile since I've had such a bummer of a project.


Last up for now are a couple of Christmas presents I finished recently. I've made some other things too, I just don't want to spoil anything for anyone. 😉 I made the Charadrii hat for Jenni, and the Wanderers: Modern Mukluks for my brother. This is probably something like the 100th hat I've made for Jenni, so she obviously needs it, and my brother isn't much of a slipper guy, but these are kind of like super thick socks? Both of the patterns really called to me and I'm pretty happy with how they both turned out! The hat was great colorwork practice (even if it's not totally perfect) and the mukluks were good small circumference colorwork knitting practice, though I never quite found my rhythm with them. I am so determined to get comfortable knitting colorwork and I feel like just maybe I'm starting to make some solid and reliable improvement. I have a few more projects to share, but I'll save them for my next post. 😎 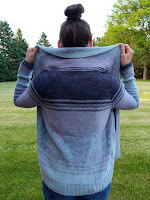